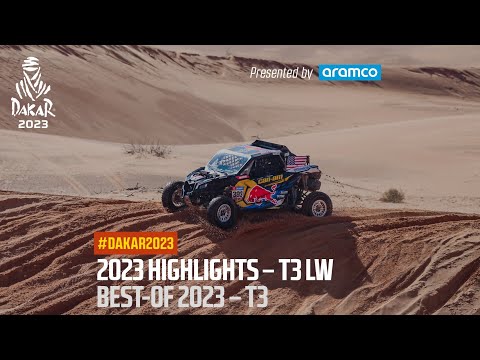 When “Chaleco” López, the defending champion of the T3 category, got the ball rolling for the 45th Dakar on the Sea Camp, everyone expected a rematch between the Chilean and Seth Quintero, the driver who had won virtually every stage of the previous edition. But one prologue does not a Dakar winner make. Cristina Gutiérrez took the opener ahead of Quintero, with no reason to suspect that Austin Jones”s twelfth place was his first step towards victory in Dammam. Yet that is exactly what happened. Gutiérrez, López and Quintero played a game of musical chairs at the top of the general standings until disaster struck each of them in turn, with snafus such as getting stuck in a flooded river in stage 3 or losing a wheel along the way. Mitch Guthrie was also hit by a mechanical in stage 5, leaving Guillaume de Mevius in the lead with Jones hot on his heels. The Belgian thought it was his for a long time, at least until km 41 of stage 11, when a mechanical in the desert cost him and his co-driver François Cazalet more than an hour and a half. From then on, the race was Jones”s to lose. It was all over but the shouting. A series of victories by Guthrie, Quintero and even the new Yamaha prototypes driven by João Ferreira and Ricardo Porem failed to rattle the ever-consistent Jones, who only finished five times outside the top 5. The American, who had already won the SSV race last year, grabbed the T3 title on his first attempt.

HOW Did Alonso Score Points After This 😱 #Shorts