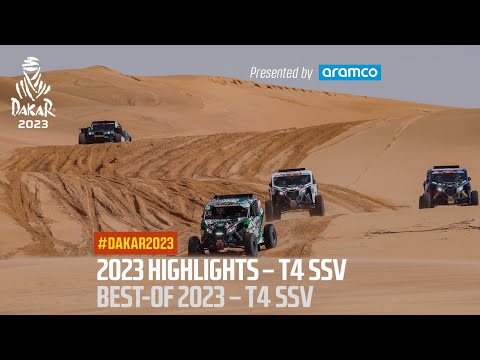 Following Austin Jones”s promotion to T3, logic dictated that the title would come down to a clash between the Goczał brothers, Marek and Michał, who had hoovered up eight stage wins between them last year; the W2RC champion in the SSV category, Rokas Baciuška; or even the 2022 runner-up, the experienced Gerard Farrés. But the real threat came from left field, namely from a rookie by the name of Eryk Goczał —Marek”s son. At the tender age of 18, the Pole became the youngest Dakar stage winner on the second day, breaking Seth Quintero”s record. Some might have put it down to beginner”s luck, but the latest scion of the Goczał family did not rest on his laurels. His tour de force in stage 4 positioned him among the pretenders to the crown, alongside his father and Rodrigo Luppi de Oliveira, who was a paragon of consistency in the first half of the event before losing over 40 minutes and slipping out of contention. Lady Luck also frowned on other big names: Baciuška, Marek, Eryk… There was something for everyone, but it did have the beneficial consequence of tightening the race. Baciuška seized the lead and managed to defend a narrow gap until the evening of the penultimate stage. With a bit over three minutes separating the Lithuanian and Eryk Goczał, the title was still up for grabs. While the finale was widely seen as little more than a walk in the park, this was definitely not the case for Baciuška, who lost around twenty minutes due to a broken suspension arm. Eryk Goczał, more determined than ever, took his maiden Dakar win after all. It was an exploit for the ages for the family, as Marek also succeeded in defending his third place overall. Baciuška, second, finished one rung higher than in 2022, but it will no doubt leave a bitter taste in his mouth. Over 53 h of racing in the SSV category with a twist at the end.

Lights Out And Away We Gon't ❌ #Shorts